The film-watching was frantic toward the end and the afternoon of debate was fierce and fun.

End result: What I think is a terrific list of year’s bests for 2019 from the Indiana Film Journalists Association, of which I am a proud member. (I’ll publish my personal list here in a few days).

Note: In addition to the traditional categories, IFJA also awards Best Ensemble, Best Vocal/Motion-Capture Performance, Breakout of the Year, Original Vision, and the Hoosier Award for a project with Indiana connections.

Here are the results, from the IFJA release: 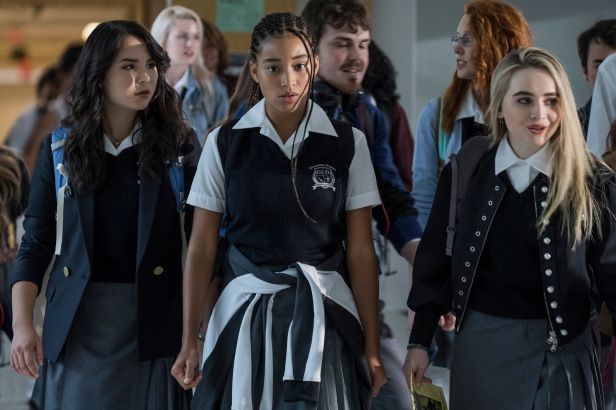 “The Hate U Give,” a drama that examines contemporary race relations in America through the eyes of a culturally conflicted young woman, took three prizes at the 2018 Indiana Film Journalists Association (IFJA) awards — including Best Film, Best Actress for Amandla Stenberg and Best Adapted Screenplay for Audrey Wells.

“Roma” and “First Reformed” each won two awards in addition to being named Best Film Finalists.

Ethan Hawke won Best Actor for his role in “First Reformed” as a reverend whose faith is tested. Writer-director Paul Schrader also took Best Original Screenplay honors for the film.

The IFJA’s Original Vision Award, given to a film with innovative and distinct storytelling, went to “Sorry to Bother You,” a satire of social issues and racial identity from writer-director Boots Riley.

The Breakout of the Year, which is given to performers or filmmakers whose work represents the arrival or realization of promising talent, went to writer-director Chloé Zhao for her contemporary Western-drama “The Rider.”

The Hoosier Award, which recognizes a significant cinematic contribution by a person or persons with roots in Indiana, or a film that depicts Hoosier State locales and stories, went to Alan Berry and Mark Enochs for their documentary “Dead Man’s Line: The True Story of Kiritsis.”

IFJA members issued this Hoosier Award statement: “This painstaking presentation of an Indianapolis hostage crisis utilizes a treasure trove of news footage and photos — some previously unseen — as well as exhaustive interviews with nearly 40 witnesses and participants. Barry and Enochs throw their audience into the fray with nail-biting intensity. But they also illustrate how a moment in Hoosier history helped usher in news as entertainment, which has – for better or worse — become inseparable from America’s cultural identity.”

Below is a complete list of winners and runners-up in all IFJA Categories:

Winner: “The Hate U Give”

“Sorry to Bother You”

“You Were Never Really Here”

Winner: “Spider-Man: Into the Spider-Verse”

Winner: “Won’t You Be My Neighbor?”

Winner: Audrey Wells, “The Hate U Give”

Runner-Up: Eric Roth, Bradley Cooper, and Will Fetters, “A Star Is Born”

Winner: Amandla Stenberg, “The Hate U Give”

Winner: “The Ballad of Buster Scruggs”

BREAKOUT OF THE YEAR

Winner: “Sorry to Bother You”

About IFJA: The Indiana Film Journalists Association was established in February 2009. Members must reside in the Hoosier State and produce consistent, quality film criticism or commentary in any medium. http://indianafilmjournalists.com