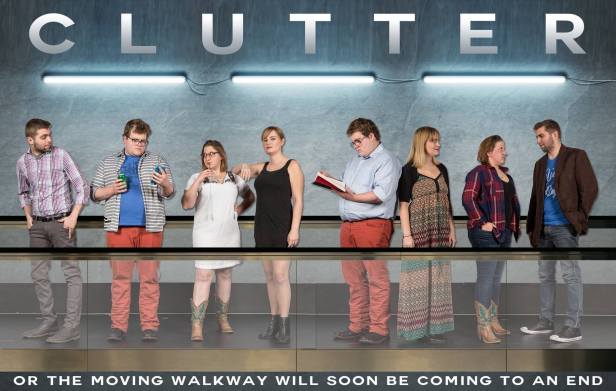 So how do these things happen?

In this case, two characters–Bobby and Eddy–started talking to each other in an office of a business that was about to go out of business. They rambled, these two, and created pages and pages of conversation.

I asked a pair of actors to read some of that rambling and they graciously agreed. I heard something in there–and I heard a lot that shouldn’t be there.

I also heard another character that wanted to be heard. Barb, who worked as a receptionist in the aforementioned office, was mentioned in the long Bobby/Eddy scene but not seen.

So she started a conversation with her friend Barb. And it turns out that that conversation was taking place three years later than the Bobby/Eddy scene. Barb had just lost her, well, she’s lost  count of how many jobs she’s lost. And pal Bev was considering leaving her husband. Both missed days when they could have fun seemingly without responsibility. At the end of the scene, Barb recognized someone at the bar.

Well, I knew the four of them would have to get together for a third scene. And it seemed right to set it three years later. Relationships had changed. Power had shifted. And a fictional self-help movement suddenly became part of their reality. “Cluttering” became a verb. And I had something resembling a play.

A Creative Renewal Fellowship from the Arts Council of Indianapolis allowed me to visit CT, where the New Haven Theatre Company and my pal Chris Arnott pull together a reading, giving me the valuable opportunity to hear the play with actors I didn’t know and an audience full of strangers. The experience was eye-opening. 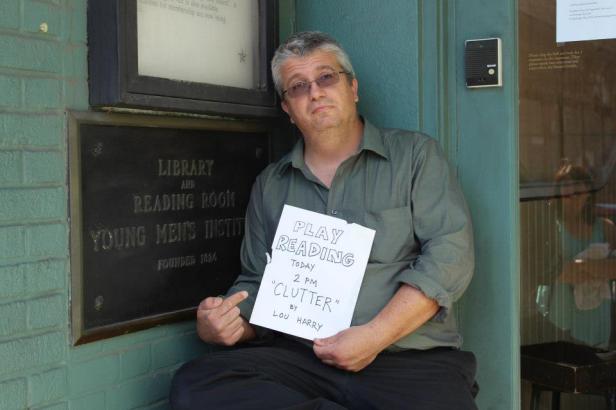 A talented quartet of actors agree to read the play–complete with new ending. I proudly say it was the first play that was read at Indy Reads Books but really the only achievement was that I was the first to ask. That was 2012.

The actors–one of who is now in LA, one who is now in NYC, one who is now in Chicago and one who is here continuing to do strong work in Indy–did an outstanding job not only of delivering the play but in helping me see what was working and what wasn’t. I always recommend that playwrights gather the best actors they can for readings so they can only blame themselves for a show’s flaws.

More readings in Indianapolis. Then Lori Raffel, the forward-thinking head honcho at Theatre on the Square, asked if she could produce it. Ultimately she also signed on as director.

After our conversations about the play–and inspired by her passion for it–I tinkered further, including adding the subtitle and its counterpart dialogue in the play itself. We brainstormed talent for it, she held auditions, and pulled together a terrific cast. She graciously allowed me in to rehearsals where I tend to keep quiet. A play may belong to a playwright but I believe a production belongs to the director, designers, and actors. As long as they stay within the parameters of my intent for the piece, I want them to have license to explore and create. I gave them the blueprints. They build the building.

I’m looking forward to seeing the play come to life this opening weekend. Bobby and Barb and Eddy and Bev have waiting quite a while to get on their feet. It’s been fun watching them grow (even when they aren’t growing).

And, no, I can’t really say if it’s a comedy or a drama. One doesn’t really know until there’s an audience.

I hope you get to see either or both.

I am a lucky man.