A few years ago, I fell in love with a play by Steven Dietz called “Bloomsday.” 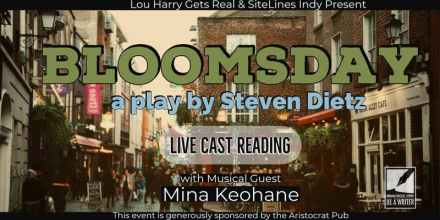 Because “Bloomsday” is set during a celebration of that famous (to literary folks, at least) day when fictional Leopold Bloom wandered around Dublin in James Joyce’s “Ulysses.” And it just felt right that an audience should be able to drink a cold one while watching this magical, beautiful, sad, funny piece of theater.

It’s a love story. It’s a loss story. There’s a bit of the supernatural in its DNA. It’s a play where the sounds and smells and sights of Dublin come alive as a down-on-himself American tourist and a yearning-to-escape young Irish tour guide not only share a brief encounter, but also share the stage with their 35-years-later selves.

I won’t say more about the plot.

And so time passed (and, appropriately, this play is very much about time) and the circumstances finally arose for presenting the play. With the Lou Harry Gets Real podcast on summer hiatus, the upstairs room at the Aristocrat Pub was open and the owners up for something adventurous. 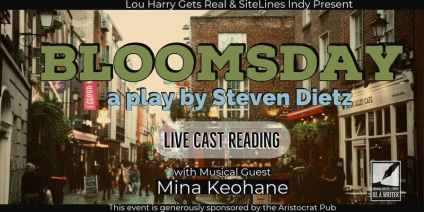 And now with the assistance of LHGR producer Patrick Chastain, we’ll be presenting a reading of “Bloomsday” on June 9 at 6 p.m.

I’m thrilled with the cast of professional actors who will be bringing the play to life: Frankie Bolda, Ryan Claus, Beverly Roche and Adam Crowe.

I’m thrilled that Mina Keohane will be providing pre-play music (and I’ll interview her for the podcast).

I’m thrilled that you can dine on Cottage Pie or Bangers and Mash before the show and have a pint during.

I’m thrilled that this could mean more such events in the future.

And I’d be thrilled to see you there.