But having seen the Goodman Theatre’s 2010 production of Anton Chekhov’s “The Seagull,” I can comfortable say that the chances of another version topping that experience are very, very slim.

That production ran about three hours, giving ample time to fall for and then have your heart broken for just about every character in the play.

The new film version of “The Seagull” (playing in Indy at Keystone Art Cinema) clocks in at under an hour and 40 minutes. It’s brisk. It’s beautiful. It manages to Cliff Notes the action and relationships. And it’s a good enough film.

It just doesn’t allow enough time with these characters in order to see and connect to their humanity. 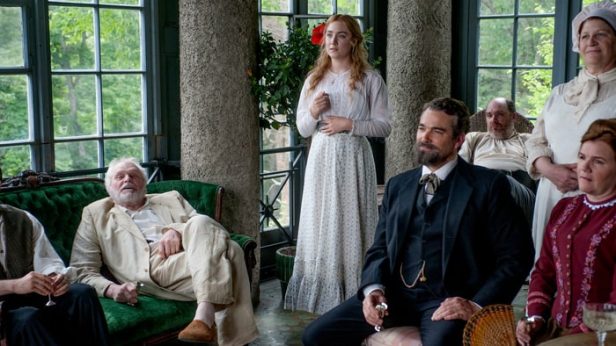 Since there is no definitive film version of the play–and since theater isn’t exactly the center-to-the-culture form it once was–it’s very likely that you haven’t yet encountered Chekhov’s enmeshed world of characters. They include Konstantin, a pretentious young playwright trying to shatter old forms in part in rebellion against his mother, Irina, a successful commercial actress, and her famed novelist boytoy Tregorin. Konstantin is in love with would-be actress Nina, who falls for Tregorin and, well, that’s just for starters.

If it weren’t so restless, this “Seagull” could have flown higher. As it stands, it’s a good film that doesn’t make the case that it comes from a great play. I’m not sure if it’s more enjoyable if you have or haven’t seen the play.

Please don’t tell him that contemporary dramas are particularly difficult to sell in this market, especially in summer.

While you are at it, please don’t tell him that it’s even more difficult when your costs are increased by actually paying your talent and caring about your design.

Marra opens “Prowess” by Ike Holter, this week. Holter is a prolific playwright and an established force in Chicago theater and his play, which premiered there in 2016, deals with urban violence, vigilantism, and, yes, superheros.

Expect fight choreography to be as important here as lighting, set, and sound.

Oh, and Marra has cast Paeton Chaviz, which is always a good move.

“Harry Potter and the Half-Blood Prince”

Confession. I have’t read the Harry Potter books beyond the first one. Nor have I seen any of the films all the way through.

That’s not a slight to the franchise. It’s just an excuse for why this recommendation is without much detail.

I have, however, heard the Indianapolis Symphony Orchestra. Many, many times. And while I appreciate the effect these screen-the-movie/play-the-score events have on the ISO’s bottom line, I still contend that the most positive effect they have is to give an excuse for people who don’t think of themselves as orchestra-goers to sit themselves down at the Hilbert Circle Theatre and listen to the glorious sounds these professional musicians can make.

The sound of a large group of people creating something collectively is a balm we need right now.