Just because IDADA (the Indianapolis Downtown Artists and Dealers Association) has folded, doesn’t mean that the first Friday of every month has suddenly gone art free. No, many galleries and art spaces are continuing the traditional, launching new exhibitions and welcoming grazing guests. 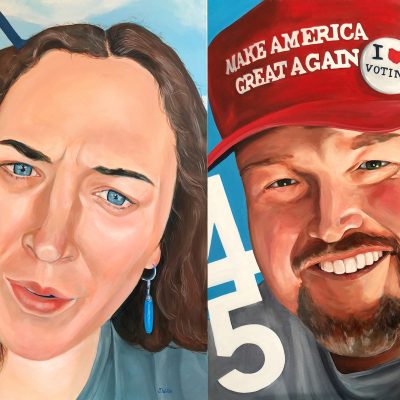 Even though it’s been offering such openings for a long time, there are still first Friday travelers who haven’t been to the Circle City Industrial Complex, so I’m encouraging you to make that one of your stops this time around. the former home of the Schwitzer automotive company is now home to over 50 galleries, many of which will feature new work.

The Schwitzer Gallery, for example, will be featuring “The 45 Project” (sample above), Jamie Willis’ collection of reactions of real people to the current POTUS.

Bonus: CCIC is next to Centerpoint Brewery which, in addition to a good beverage lineup, also has pinball machines.

Animals and All That Jazz

I haven’t seen any studies that indicate how much zoo animals like or don’t like live music.

However, it’s clear that summer patrons of institutions around the region appreciate having a live band for a soundtrack to their cultural excursions. Witness the Indianapolis Symphony Orchestra’s long-standing summer residency at Conner Prairie, the Concerts on the Canal Thursday series at the Indiana History Center, the Summer Under the Sails shows in the Eiteljorg Museum’s back yard, and the now-in-its-31st-year Animals and All That Jazz series at the Zoo.

This year’s Zoo lineup kicks off July 5 with Pavel and Direct Contact. Clifford Ratliff takes the stage July 12. the Laney Wilson Quintet follows on July 19 and the Indianapolis Jazz Orchestra and Monike Herzig are headliners for the following two weeks. Each event includes its own specially chosen food menu (there’s a low country boil on Aug. 2 for Herzig’s show) and, of course, beer pairings from local breweries.

Thursdays from July 5-Aug. 2 at the Indianapolis Zoo

Actors Theatre of Indiana, usually found in Carmel at the Center for the Performing Arts, makes a temporary move downtown to help launch the new District Theatre (formerly Theatre on the Square).

If not, suffice it to say that there’s live theater back at the Mass Ave. spot for the first time in nearly a year. The company will be reviving the spoof-packed “Forbidden Broadway.” A little bit of “Wicked” here. A bit of “The Lion King” there. And all created by musical theater buffs gleefully and affectionately biting the hands that feed their passion.

July 5-29 at the District Theatre

And, in the “What’s Lou Up To” department:

Okay, I’m partial to this one because, on multiple occasions, I’ve been honored to serve as Toastmaster for this gathering of science fiction/fantasy/gaming/whatever fans. And I’ll be back again this year in that role.

What’s a convention Toastmaster do?

Well, in my case, I act as auctioneer for an epic charity fundraiser (benefiting Indy Reads and the Julian Center), present a play reading, teach some new games, devise and lead a geek-centric Pub Trivia competition, and host the opening ceremonies where I direct an audience-voted bracket narrowing down on a relevant theme. (A previous year’s bracket was for Best Apocalyptic Film and it was a major kick that the finalists came down to “Dr. Strangelove” and “Wall-E.”)

But there’s a lot more going on at this con, including author events, a plethora of panels, a masquerade contest where where DIY work is emphasized, a Doctor Who room, craft workshops, yoga (is yoga now mandatory at every event everywhere?), and, my favorite, Dr. Rob Pyatt’s Weird Science program, which, if it were up to me, would have a permanent home at a theater near you.

Does it sound like I have fun at this event?

I have fun at this event. More info here.

July 6-8 at the Indianapolis Marriott East